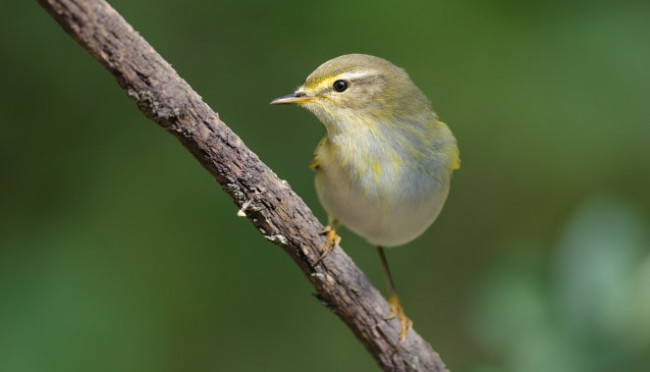 Willow Warblers are insectivorous, in particular feeding on bees, beetles, aphids, gnats, caterpillars and flies. The Willow Warbler will often sing and shake its wings when foraging for insects – an example of whistling while you work! In the autumn, Willow Warblers will also eat berries. Their young feed on larvae.

The Willow Warbler’s song is extremely distinctive. A gentle crescendo is followed by cascading phrases, dying away. The song is commonly found to be beautiful to hear – plaintive and disyllabic, lasting for around 3 seconds. The Willow Warbler's song also distinguishes it from the confusingly similar Chiffchaff, which has very similar plumage. The underside of the Willow Warbler is a yellowish white. It has a brown bill and orangey-brown legs (as opposed to the Chiffchaff's dark legs). In flight the Willow Warbler can be seen darting after flying insects, and it may also briefly be seen to hover. The male courts by chasing the female, while quivering his wings. He then extends this into a display of fluttering in which the wings are hardly beaten. The Willow Warbler is also a rare example of a bird which moults twice in a year – once when wintering and once when breeding.

Willow Warblers create their nests out of moss and grass, lined with feathers. The nests are domed in shape. Although built on the ground, they are concealed in the foliage, making them hard to find. Eggs are white and lightly speckled and are laid in clutches of between 5 and 7. Incubation then takes 13 - 14 days. Nests and the male’s territory are defended vigorously, with other species including larger song birds being chased off.