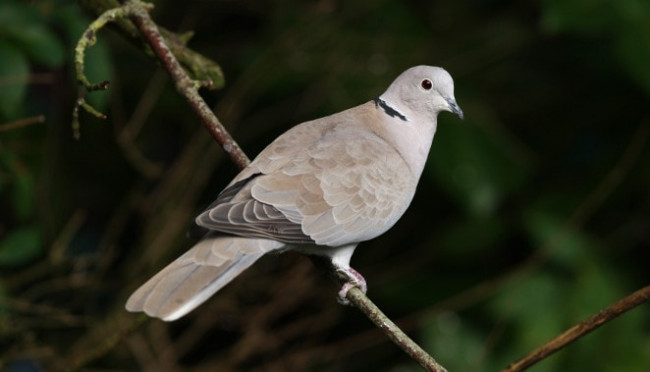 Collared Doves eat seeds, buds, grain, fruits, berries and bread. Unlike many species of bird their chicks are fed on crop milk. They are common garden visitors, especially in winter when food is scarce and can be seen foraging on the ground. They are very territorial and aggressive and are known to scare smaller birds away from feeding stations, which is why they can become unpopular with humans who want to see all the birds getting their share! This territorial streak is thought to be linked to their high reproductive output.

These Doves are slim with a long tail, and their plumage is predominantly pale brown with a pinkish flush on the breast and they have a distinctive black neck collar. They have short red legs and a black bill. Both sexes look alike, but the male has a monotonous cooing ‘song’. Juvenile Collared Doves have dark brown plumage.

Collared Doves can be found in settlements of all types – farms, gardens, zoos and parks, often nesting near humans. They tend to avoid forested areas where their light colour means that they would stand out, making them more susceptible to hawks and other predators. They usually build their nests in the fork of a tree or bush but have been recorded nesting in more unusual places including a window box full of flowers! Their ‘nests’ are made from twigs, stems, roots and grasses but are often just an insubstantial platform of twigs! Some nests are so flimsy that the eggs and chicks can fatally fall through the gaps and plunge to the ground. Collared Doves produce between 2 and 4 broods a year from mid February to early October. Each brood consists of 2 white, slightly glossy eggs which are incubated by both sexes for 14-18 days.