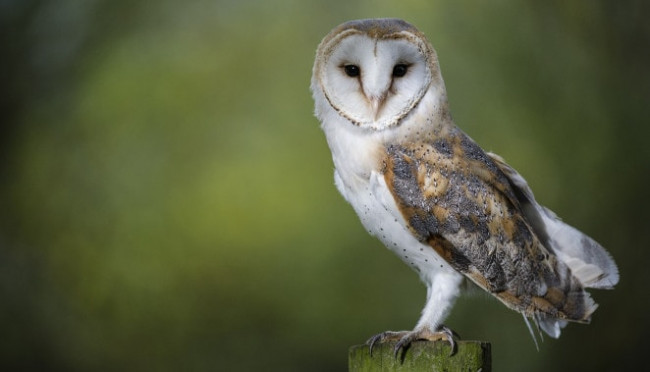 In Britain, 90% of a Barn Owl’s prey consists of woodland rodents which are hunted in the undergrowth and at the side of country lanes. Barn Owls will hunt their prey from exposed perches (such as fence posts) and also in flight, where they will fly low and slow over field edges in a wavering direction. They catch their prey with their powerful toes and are assisted by their long and sharp talons. The outer talon is actually reversible to enable a better hold on prey. They eat their prey whole, regurgitating large, blackish pellets consisting of indigestible parts such as teeth, fur and bones. As well as rodents such as voles, wood mice and rats, Barn Owls are also known to eat small birds and amphibians.

The Barn Owl is perhaps one of the most easily recognisable of the hunting owls because of it pure white under side and pale upper parts. Smaller than a Tawny Owl, the Barn Owl has longer and narrower wings and its white mask-like face is one of its most distinguishing features. Both sexes have yellowish-brown upper parts, although grey is also a common colour. Females do tend to have more spotting on the back and breast and are slightly larger in size compared to the males. Whilst the talons of the Barn Owl are always black, its toes and the bill vary in colour from pinkish to dark pinkish – grey. The heart shape face is visible soon after hatching for juvenile Barn Owls, however once they lose their off-white down they resemble the adult.

As its name suggests the Barn Owl chooses undisturbed buildings for its nesting sites, but equally common is for it to use tree holes or crevices in cliffs and rocks. Rather than bringing materials to the nest to build, the Barn Owl tends to make use of existing debris at the nesting site simply clearing away what is not needed. Breeding starts in April and once laid, the white, non-glossy eggs are incubated by the female for a period of 27-34 days. Laying 4-7 eggs in intervals of 2 days, Barn Owls will produce 1-2 clutches each year. As the eggs are laid in intervals they also hatch at different times and it is often the oldest and largest of the chicks which is fed first. Both male and female will feed the chicks. Unfortunately for the younger chicks, if food is in short supply they will often die and become food for the surviving chicks. Once independent the juveniles will disperse to find their own territory so there is less competition for food.